I will undeniably mostly post jock-type trip reports. I will try to keep them high effort. I encourage all types of trips reports - drug ones, going to the bodega ones, trying out that one bar you've meant to get to but it's always just out of the way ones. A trip is what you make of it.

tripped over my rug this morning
Top 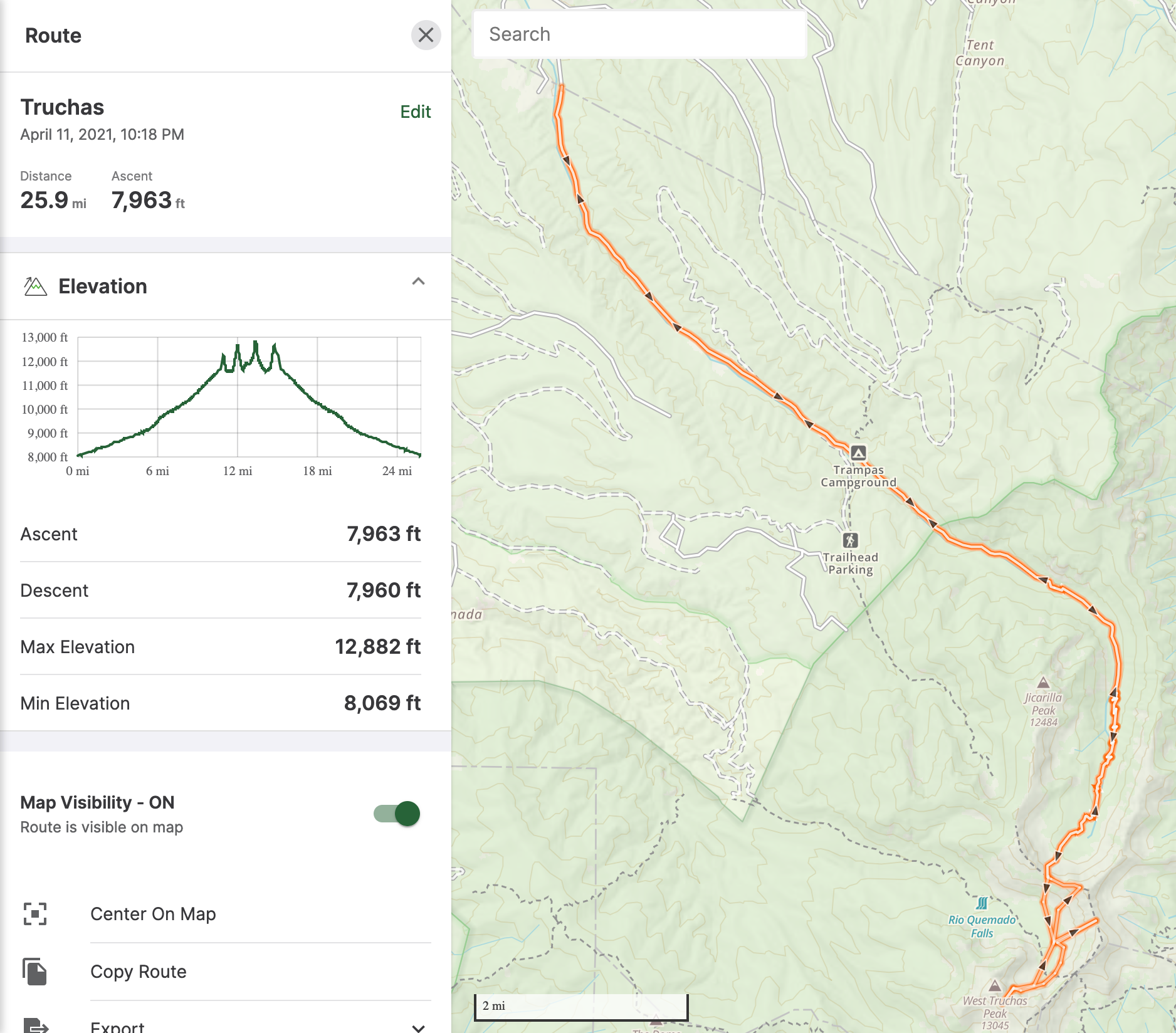 Background
This trip begins with me mildly overstating my ice/snow climbing, winter camping, and high altitude mountaineering credentials (minor, minor, and none respectively). Luckily once my partner was convinced, and the trip dates were set, the trip did fall directly into my wheelhouse of “rapidly teaching myself things on the internet”. The plan was to “Ski the Truchas” - a series of mountains in northern New Mexico that contain South Truchas - the second highest peak in the state. Luckily my climbing partner had extensive experience hiking and camping in the area, leaving me to obsess about clothing, gear, and fitness.

I put this all in a backpack I made specifically for this trip.

Day One
I left work at 3PM MT and drove to the trailhead with my partner. We were at a (luckily expected) locked gate by 4:30, where we loaded our packs and began [redacted]. After [redacted] ~4 miles, we hid/locked the [redacted] and started hiking. 2 miles later, we swapped to skis, and went maybe a mile further until we decided to make camp around 7:30PM.
Day Two
We woke early- ~ 4AM - because we were concerned about the southern facing slopes (with more sun exposure, and therefore avalanche risk) that we knew we needed to cross later in the day. We skinned uphill for 3 miles until we hit the base of our first climb. From there we switched to crampons and ascended a moderate snow slope. After scaring off some sheep from the ridge we swapped back to skis for a very patchy descent on a southern face, which ended with us shouldering skis and moving down a scree field. We found a suitable campsite, in the basin we had skied into, dropped non-essential gear and ascended an eastern facing slope to get some skiing in and learn a bit more about the snowpack. The snow was hard and clearly affected by the deep freeze the night before, and made for some fast, albeit chattery skiing. Unsure of wet slab avalanche risk later in the day, we retired to camp and built out our tent and snow platform(10AM). I napped, scouted lines on my GPS app, and zoned out for the next 6 hours. Once the sun began to set, we made dinner and decided that because the southern face we had crossed had been relatively bare, we both felt comfortable ascending it later than we normally would, potentially shortening our 4 day trip into a 3 day one provided we were able to ascend our main objective quickly and get across the patchy southern face before major sun exposure). We planned on a 6AM wakeup.
Day Three
Miserable night’s sleep - I think the altitude got to me as well as my relatively meager winter camping setup, so I was glad to hear the alarm go off, and have the possibility of a real bed to sleep in tonight - provided everything worked to plan. We had packed well the night before, so after a quick breakfast, we began making our way to the base of our main objective - a predominant couloir between West and Middle Truchas. After switching to crampons, my partner led the mellower first half, then graciously let me lead the narrower, steeper top part. This absolutely tested my meager snow climbing abilities, but topping out was an unbelievable feeling. A quick transition found me skiing amazing snow back to our base camp, and quickly gathering the last of our gear for an expedited ascent of our rapidly warming exit slopes. Since what we had descend the previous day was relatively bare, we decided to try to ascend a snowier couloir to the west of our decent route, with the hope that we would be able to climb the snow quicker than we would be able to bushwack through the trees we had picked our way down before. The couloir ended with a slightly technical rock band, but we were luckily able to traverse to our left onto a rocky ridge and ascend above what we had climbed over the day before. After reaching the ridgeline, we traversed until we were at the couloir we thought we had ascended the day before, but was actually the line to the east of it. The skiing was variable, with some sections deeply sun affected and some consolidated parts that had previously slid (sometime in the last 24h, according to my photos from our ascent). We skied down what we had skinned up the day before, swapped to trail runners at the snow line, found our [redacted] safe and undisturbed, and rolled downhill to the car.
What worked
I will spare care-tags the extensive gear nerdery, but I will say that I was extremely happy with how my skis, bindings, crampons, and ice axe fared for this trip. All were new to me this year, and they have proven to be great choices. My Patagonia Houdini wind shirt continues to be the layer I wear most and my Arc’teryx softshell pants were always on my bottom half with the exception of sleeping. Some no-name Amazon fishing vest has become my go to layer for skiing because of its mesh back and large front game pockets - it’s quite nice to be able to stash extra gloves, layers, skins, or food quickly without dealing with taking off my pack.
What didn’t
Winter camping sucks. I tried to get by with my 3 season sleeping bag + a puffy jacket and a lower body layer, but I definitely need either a winter bag, a more insulating sleeping pad, or some form of down pants/booties (or perhaps all 3). I was slightly disappointed with how my ski boots fared - they’re billed as a lightweight pair of boots, so I didn't expect much by the way of warmth, but my feet were VERY cold in them. I may need to look into more substantial liners to put into them for bigger trips like this. The only pieces of clothing that I brought that I didn't use were the running shorts - my plan was to use them in place of tights if we had an especially warm day, but we did not. They were nice as a fresh bottom layer for the drive home though. I also brought all my contact shit and just ended up using my glasses. 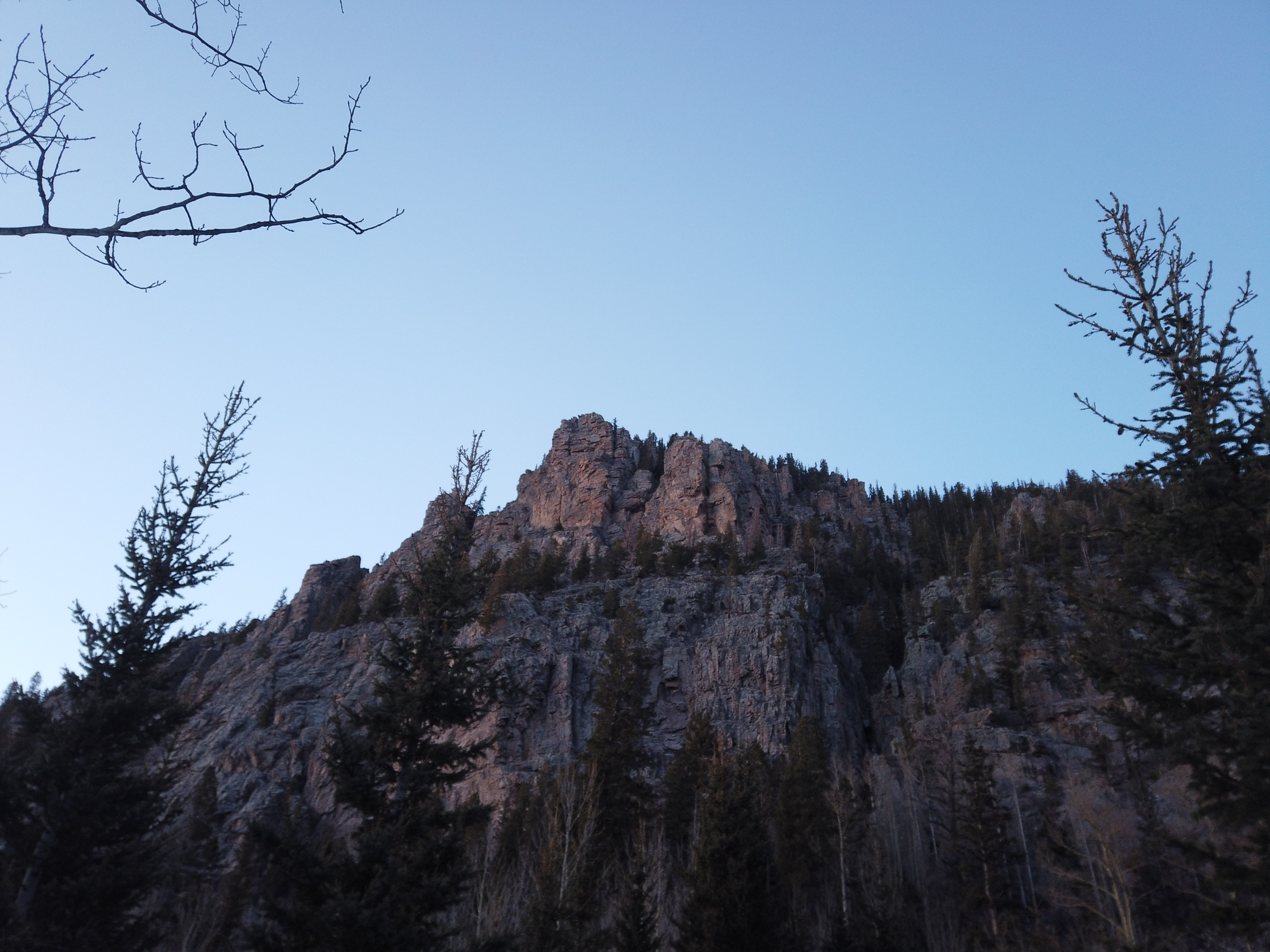 Sunset from camp on the first night 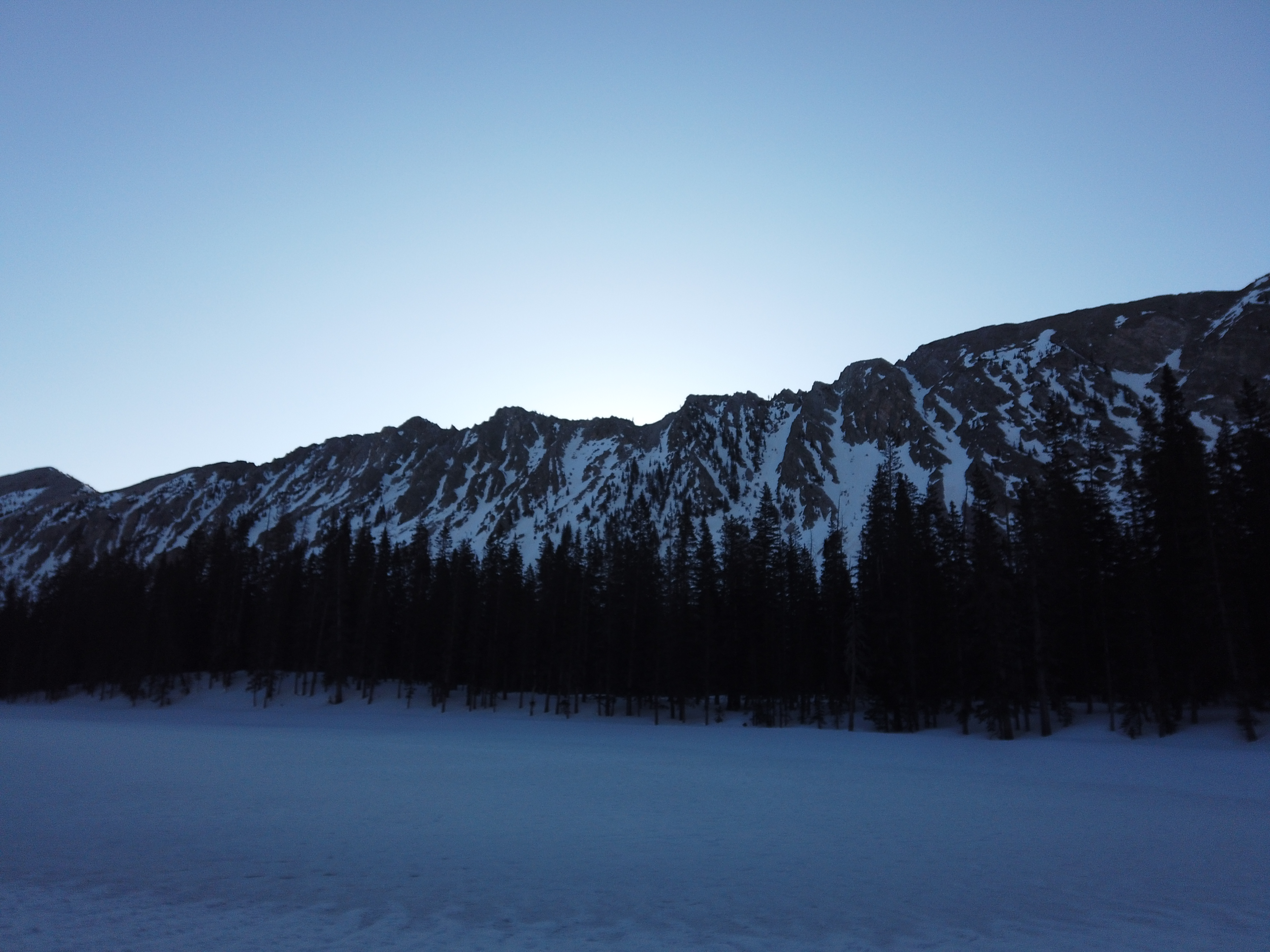 sunrise over the mountains to the east 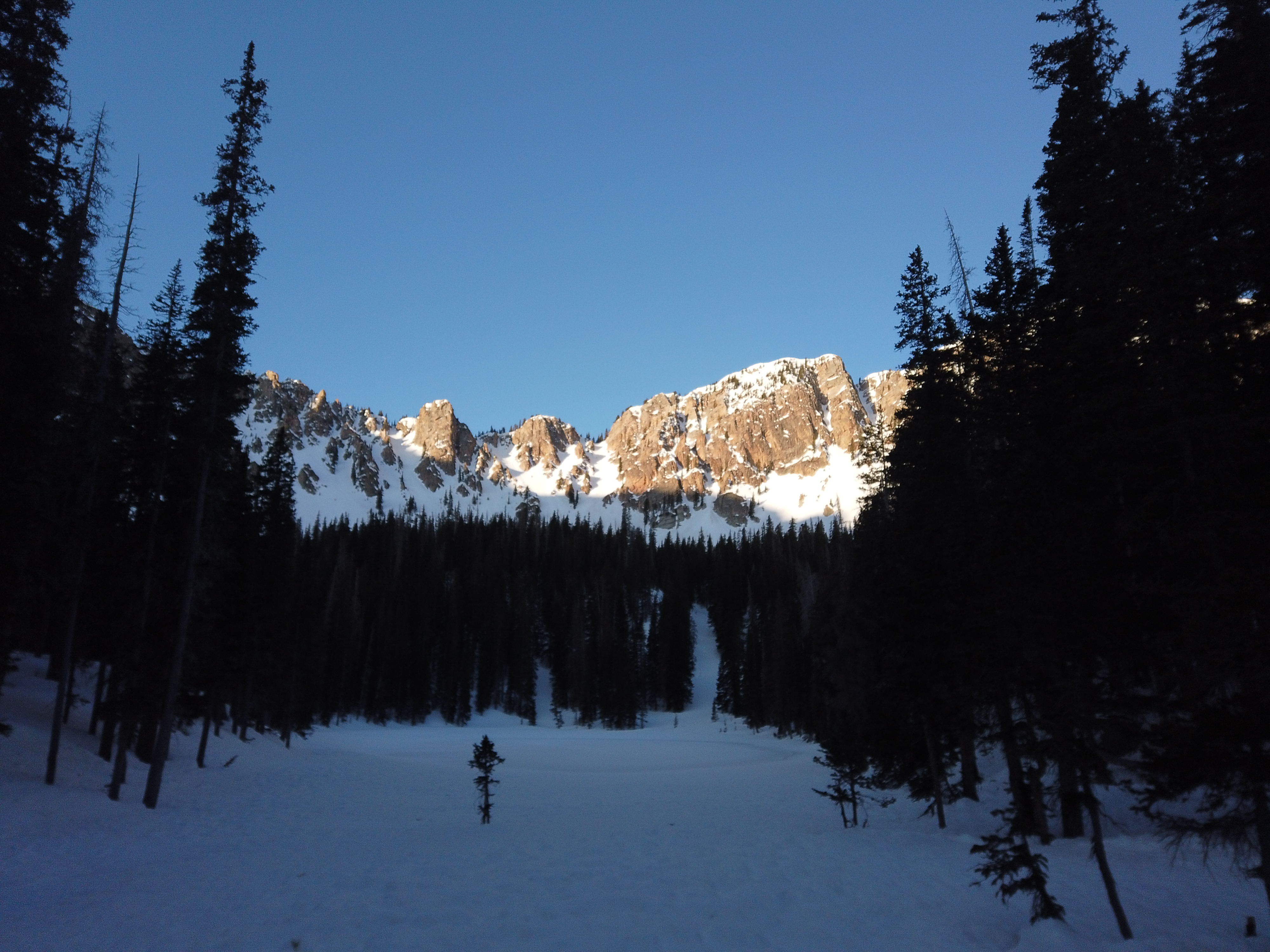 Sunrise on our first climb, we went up the middle line to lookers left of the rock band. 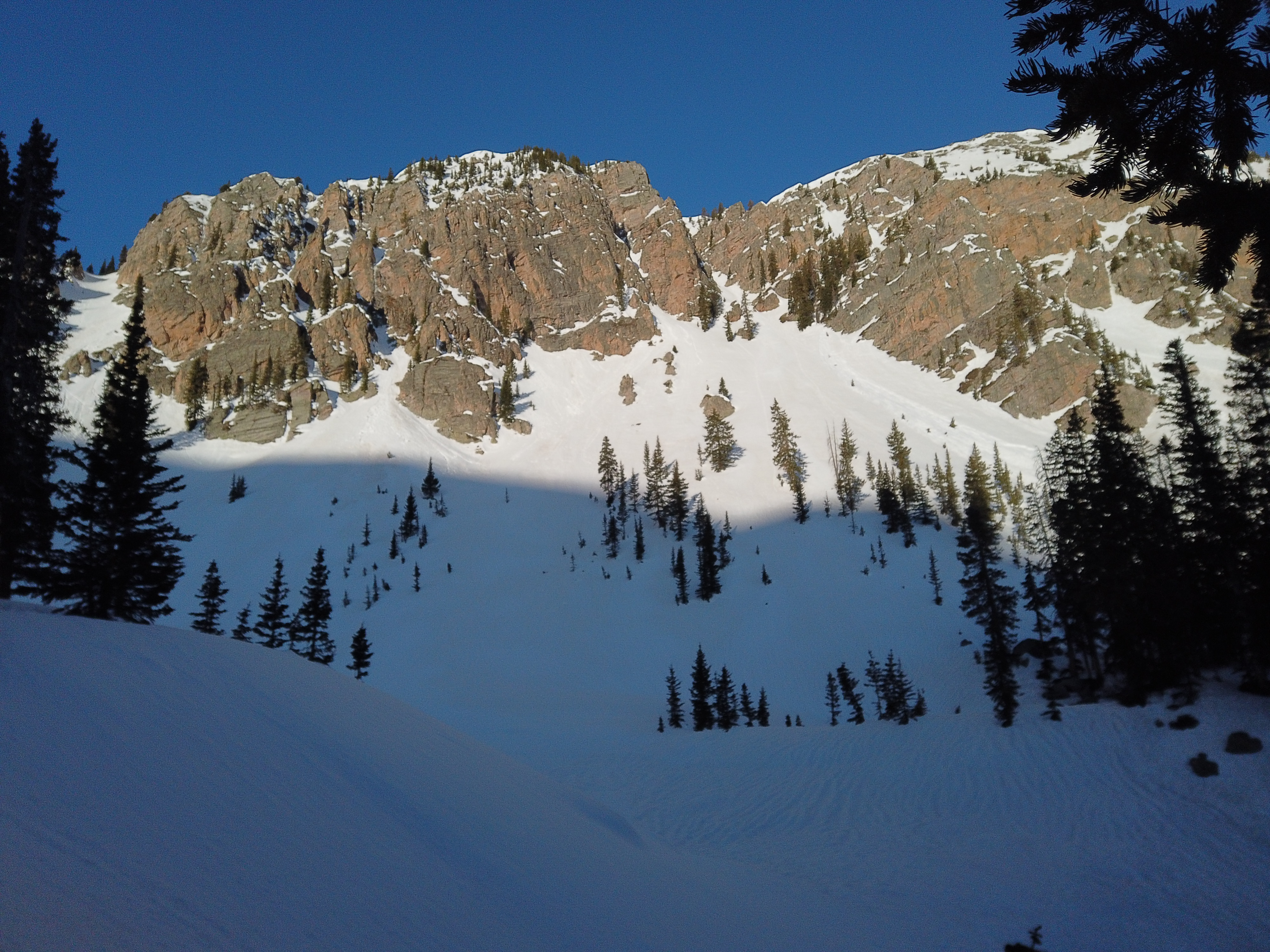 base of our first climb, we went up the gulley to the far left of the shot 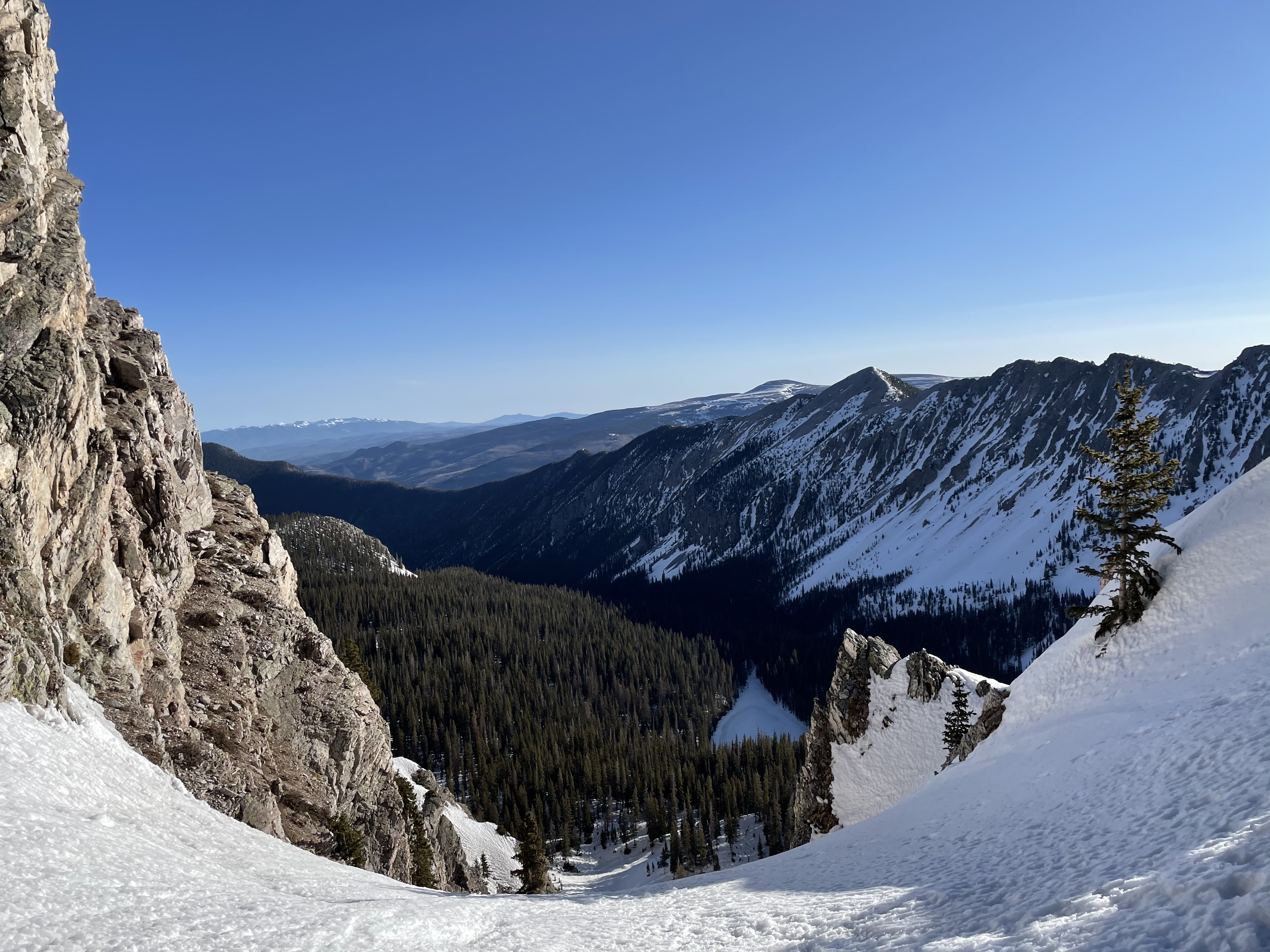 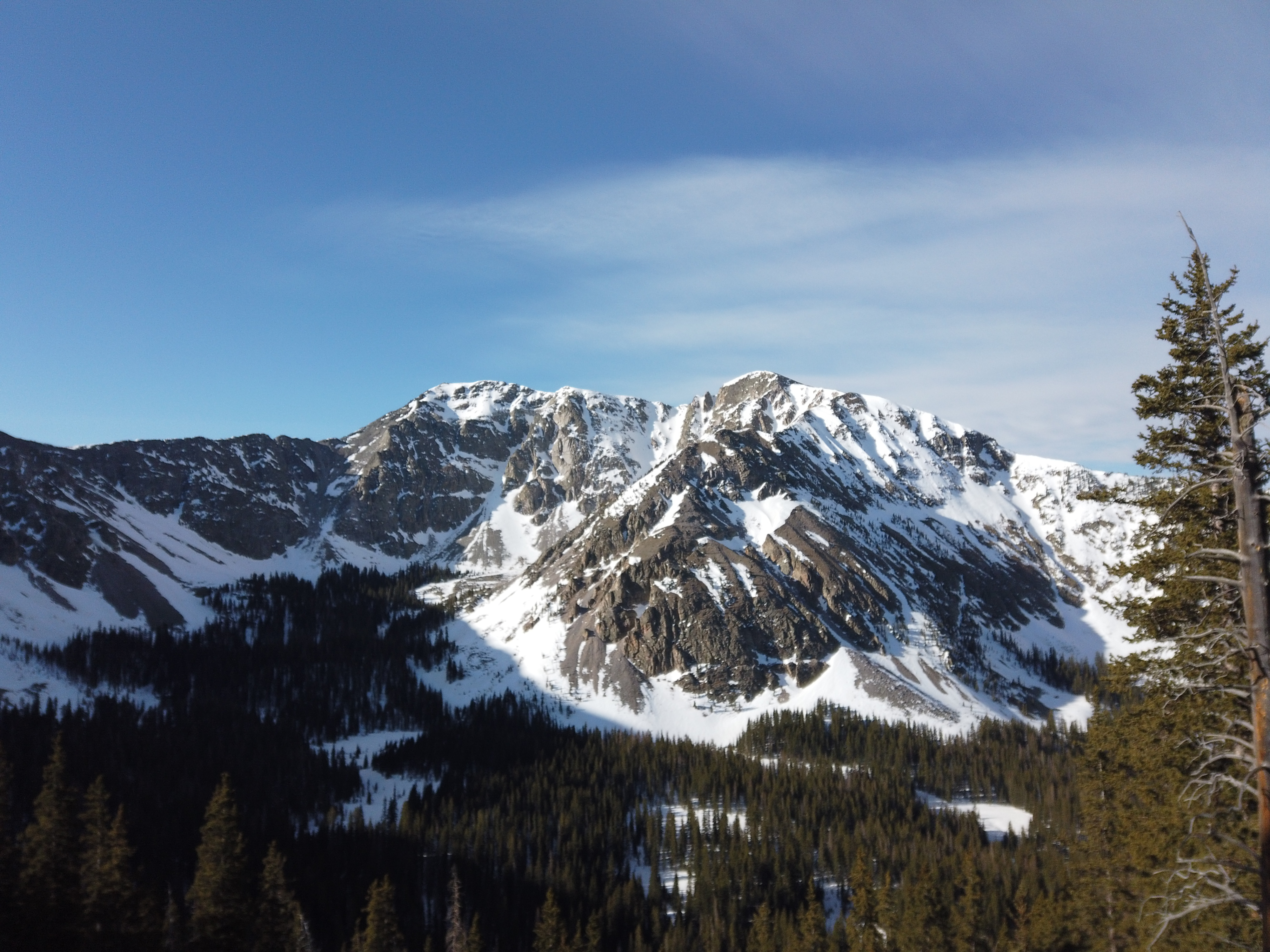 First view of our main objective 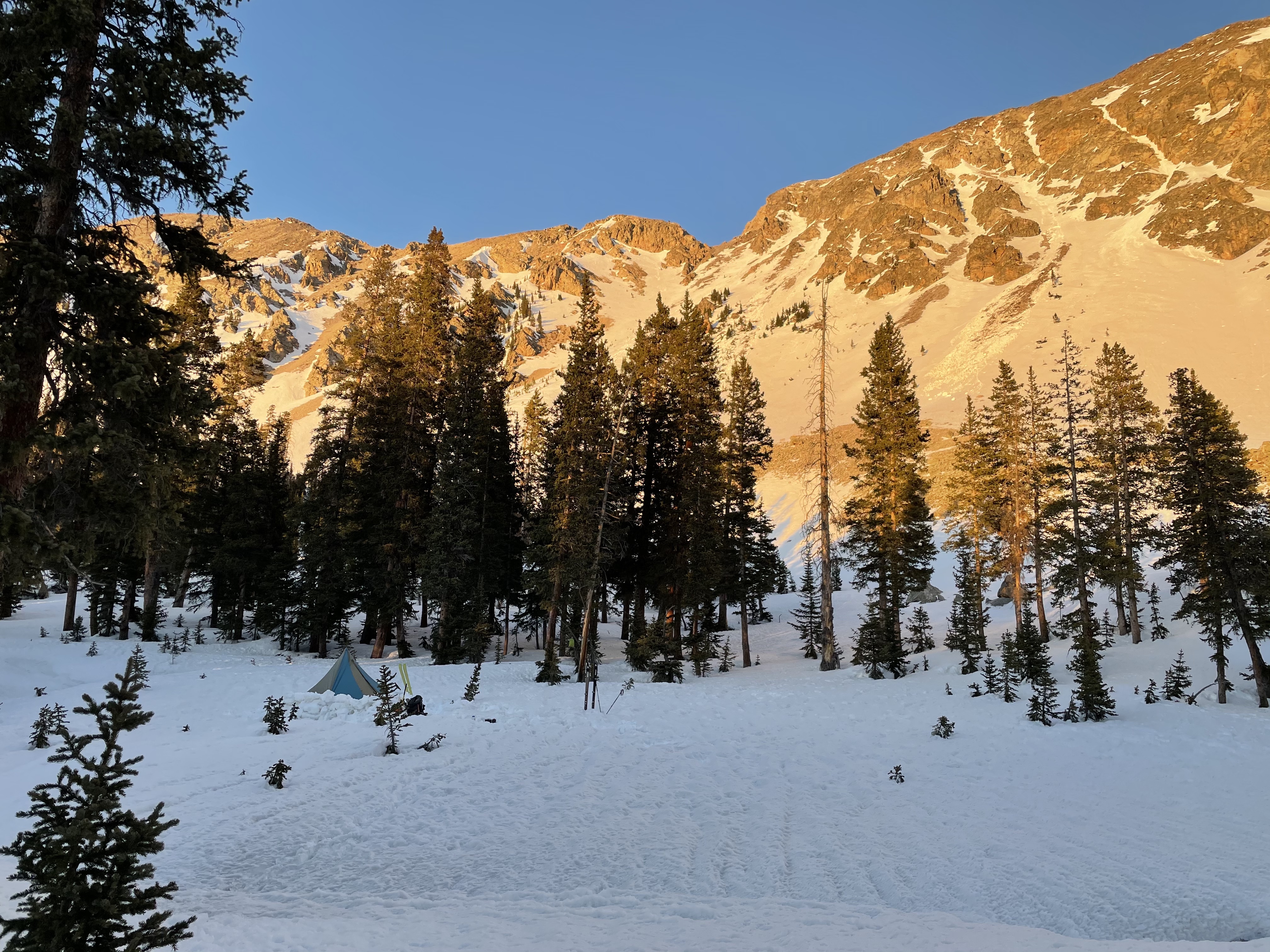 Sunset over camp for the night. 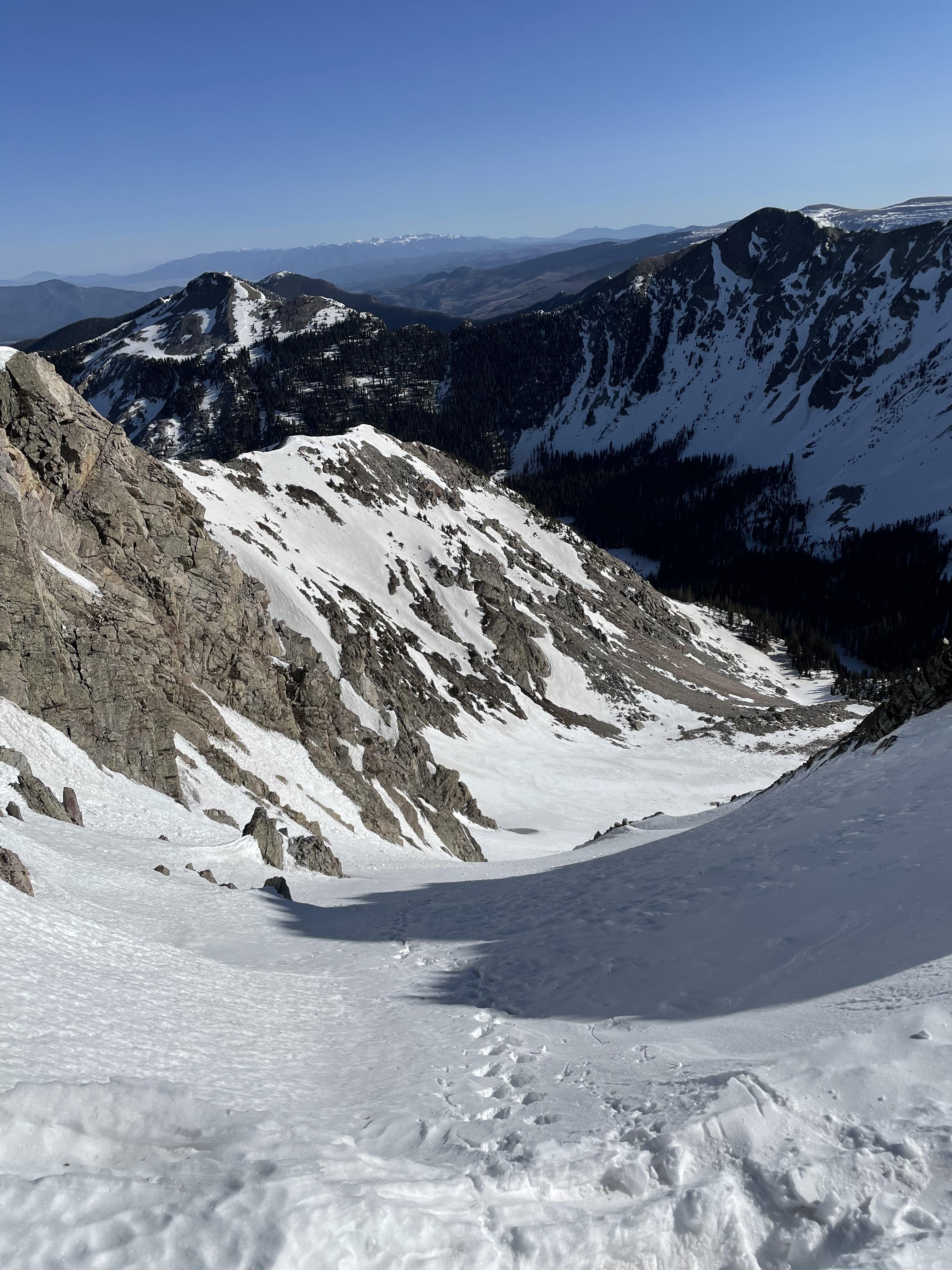 Looking down our main line 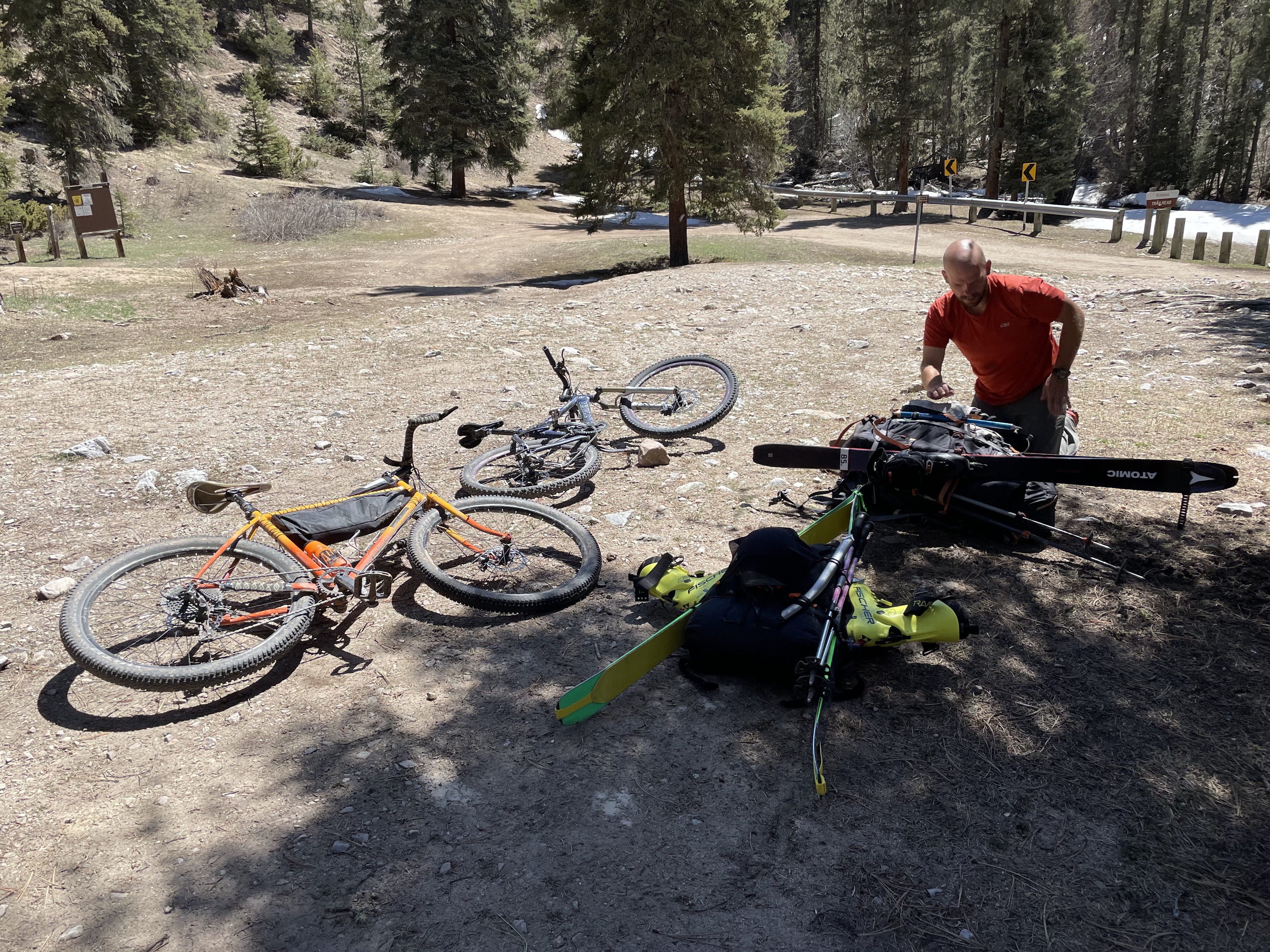 Emma wanted to go on a Sunday [redacted] ride since she'd been inside working on music for most of the day. The other night when I went to pick up barbecue for dinner I noticed that there was a brewery right next to it that we hadn't been to before. We decided to [redacted] there for a quick beer before making a dinner at home. The ride there was easy along the river path, which is mostly downhill that way. The brewery was nice, and we got a bit of afternoon sun on the patio which helped offset a bit of the chill. 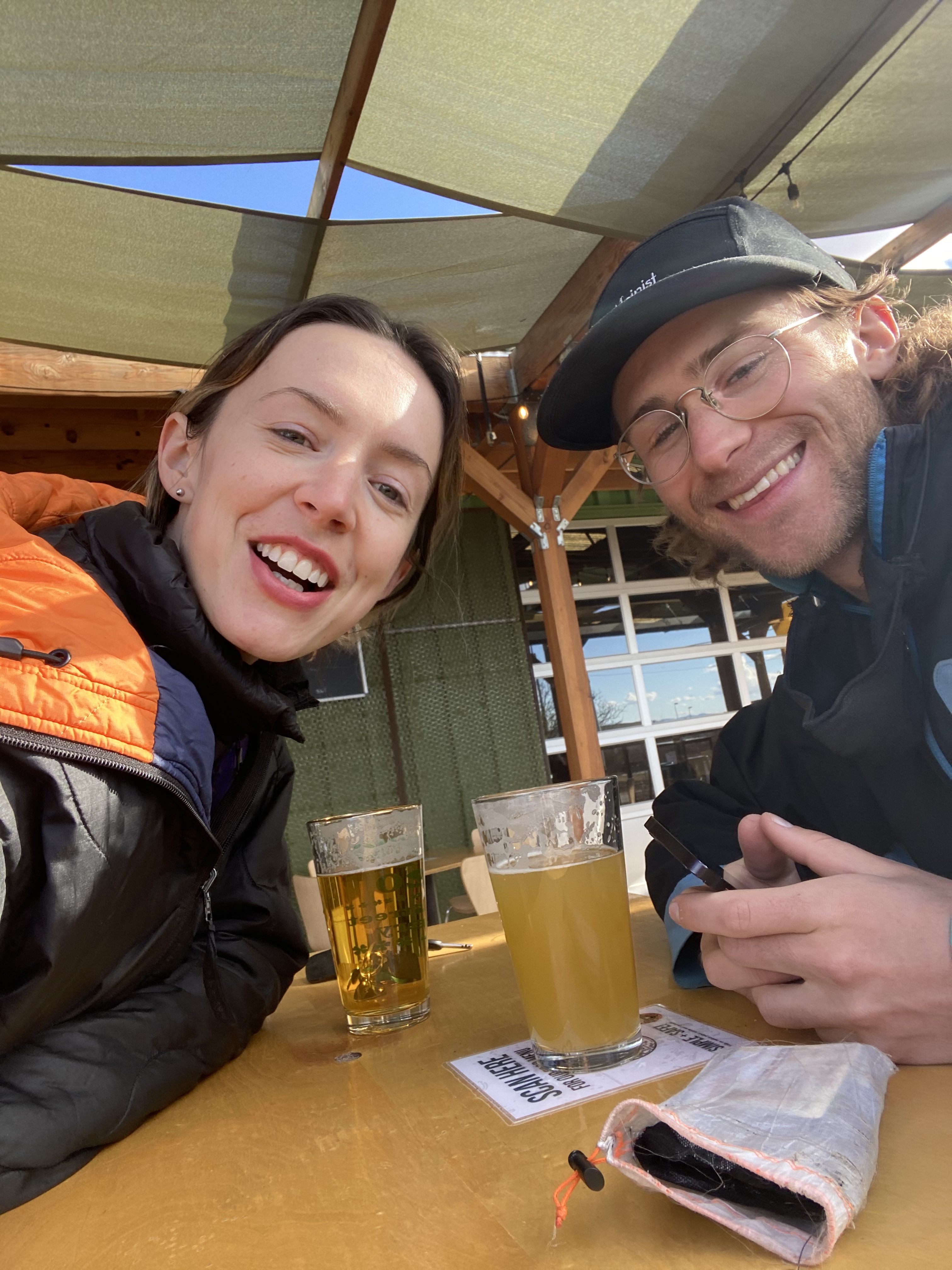 The ride back home was uphill, so we worked up a bit more of a sweat. Looking up at the mountains we could see storm clouds bringing down what may be the last of the snow for the year through the sunset. A falcon swooped across our path on the dirt road near our home.

woke up at 4:30am this morning to go drop my friend at the airport

he goes off to the terminal to make the flight

has to walk back to the car

we got mcdonalds breakfast

drove back to london 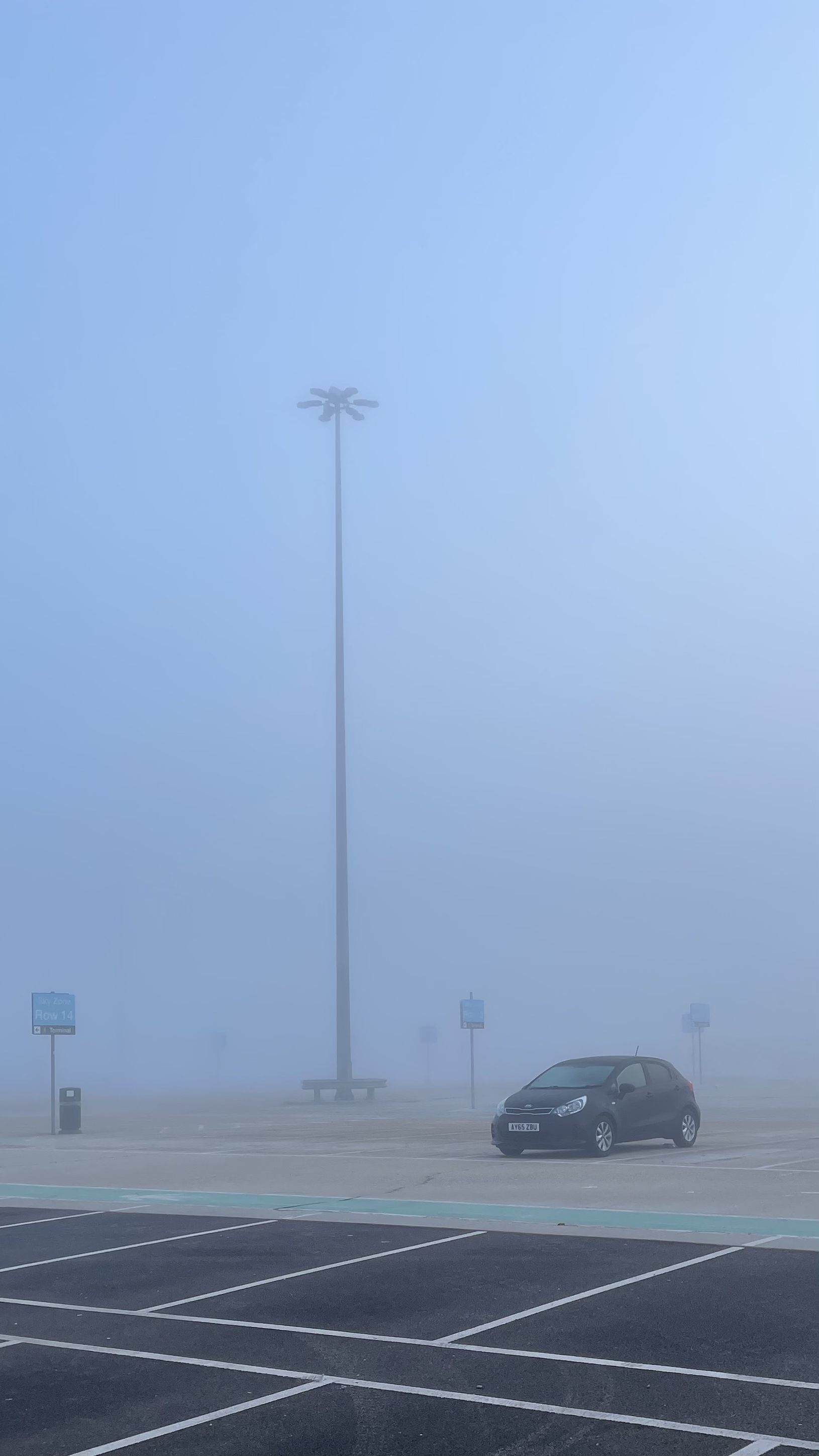 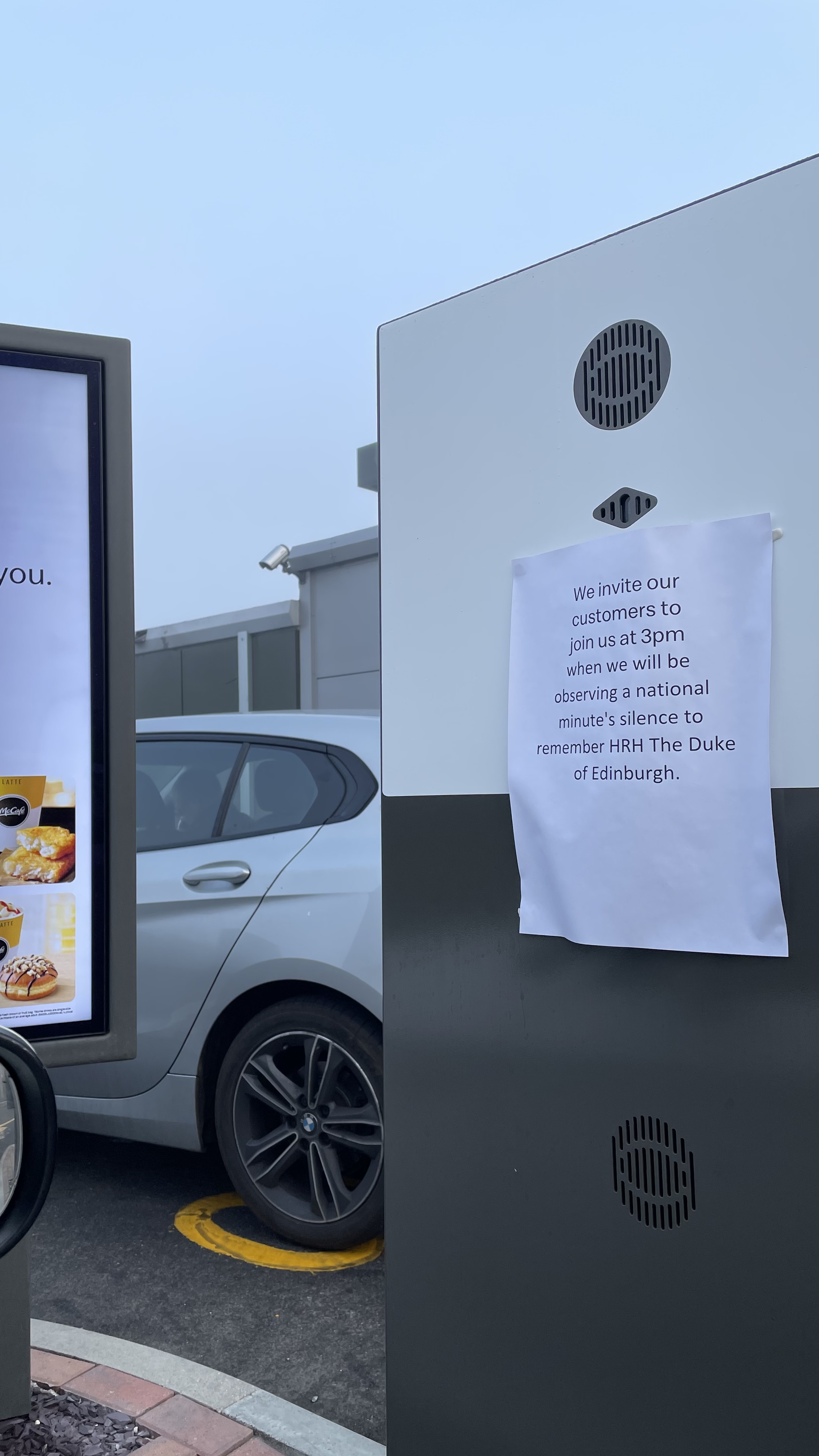