"Why on earth do you climb mountains?"

Rock climbing as a general sport will be featured in the : "The climbing event will include three disiplines: sport, bouldering, and speed". Climbing is the integration of mental strength, physical strength, and physical technique and coordination. It's a very robust sport that appreciates all body types in that shorter people will have a very different, but just as valid, approach to solving a problem or route in comparison to someone who is much taller. Watching the Olympics in 2020 will be interesting, the winners will be determined by their scores on all three disciples as opposed to each individual disciple so the winner may not be exceptionally good at one discipline in particular, but well-rounded with regards to all three disciples. Speed climbing is the one 'discipline' that a lot of people take issue with, especially that it's being featured in the Olympics.

There are tons of variations of climbing 'flavors' or 'genres' so to speak, the main ones are sport, trad (short for traditional), and bouldering. Sport and trad climbing utilize a rope and a belayer as a means of safety when scaling a wall, whereas in bouldering climbers use a crash pad as a form of safety when scaling a much smaller problem that won't cause injury if they fall. Sport and trad are very similar in terms of athletic movement save for one intricacy being that trad climbers use protection that isn't physically bolted into a wall permanently.

A good resource for finding outdoor climbing routes near you is which is a user-populated resource for finding climbing routes in your area. It's very mobile friendly (it has an app) which lets you download content so that you can view routes and area information while out in the back country where you might not have service. A lot of the routes that populate mountain project come from physical guide books that would be made by locals and kind of distributed in a myriad of ways, but now most of them are becoming well known and accessible through Mountain Project. You'll notice the most popular route on Mountain Project right now is .

Rock climbing has a very rich history in the United States and has its connections to the beat generation. If you read Kerouac's Dharma Bums, Japhy Snyder is a literary parallel to Gary Snyder, the famed poet, activist, lecturer, and most importantly: rock climber. Patagonia, the now famous clothing company, originated as a steel works company making pitons for rock climbing.

Rock climbing gyms are becoming very commonplace as well and more likely than not you can find a decent gym within biking/driving distance of where you live. Gyms are a great place to get acquainted with the sport and familiarize yourself with the sport. I spent my first 5-6 months rock climbing in a gym before I felt confident enough to climb outside/to have the gear to climb outside. They are also a great alternative to climbing outside when the weather doesn't allow it.

Bouldering problem in camp 4 in Yosemite If anyone wants to share personal climbing spots and their locations, that'd be cool. Most of the 'best' climbing I've been able to do outside have been from personal and local recommendations which aren't on Mountain Project.

Unfortunately as rock climbing becomes more and more popular, rock climbing spots get overused and abused and lose a lot of their niceness. Always practice (Leave No Trace) when going out into the back country.

Flagstaff is definitely a rock climbing haven from what I've been able to experience in my two years here so far. Most of the popular crags in Flagstaff, AZ are incredibly well maintained (save for Mt. Elden) and have plenty of permanent quick draws and bolts that are in good condition. Go anywhere downtown at the local outdoor goods stores and you'll more than likely meet a sponsored rock climber who gets free gear from various rock climbing brands and they're usually more than happy to chat with you about local spots that aren't as well known. We have three major climbing gyms within two miles of each other, one being the largest bouldering gym in all of Arizona which hosts many competitions on a regular basis and always has friendly gym-goers willing to work on problems with you.

The Pit, Jack's Canyon, Mt. Elden (if you like slabs), and Sedona (about 40 miles south of Flagstaff) all have plenty of routes that are easily accessible and found on Mountain Project if you want more specific information on them.

With regards to Bouldering Lake Mary, Priests Draw, Buffalo Park, and Sedona would be the go-to places for sure. Priests Draw is incredibly well known for their beautiful limestone roofs that can be found throughout the draw. Priests Draw is a great place to get a good circuit workout in as plenty of roots are all within 5 minutes of walking distance from each other and the boulders are all great to climb on year round (assuming it didn't snow within the week).

My personal recommendation for getting started with rock climbing would be through a gym so as to learn proper safety techniques from trained staff as opposed to through word of mouth. Also it's a much lower barrier to entry when all you need is a gym membership and a pair of shoes if shoe rentals aren't included (most gyms include rentals as part of their membership fee).

What about touchin Icy Things?

I'm lucky enough to live where it's a) fuckin cold and b ) rad people farm ice for climbing. Heading out on Monday to learn to ice climb for the first time. Very stoked !

Rock climbing is the best. I'm going to Cuba in a few week and will get a couple of climbing days in, but my endurance is shit right now so who knows how that will go (but those tufas look so rad). Here's a pic while doing a hanging belay about halfway up a 12 pitch climb

stay tuned for pictures of me dying while climbing ice. went and touched on some ice. That's awesome @silvaeri ice climbing is definitely on the list for the near future.

Been taking training a lot more seriously wrt finger strength and strength endurance and I've been surprised by how much that has been helping. Just doing 45+ minutes at the end of each workout doing fingerboard stuff and ring-related core stuff has been helping me move up grades pretty easily.

And, of course. climbing at priest draw all winter. The roofs have been warm and dry all month.

Matt's the manager at a local outdoor goods store and is always happy to give inquiring people advice on where to find good climbing around Flag. I really love his perspective on climbing, the video is a nice mix of climbing montage/interviewing. this showed up in tumblr feed today and i'm really diggin the movement of this problem. that heel hand match is dope.

Update: Went to Cuba, climbing in Viñales is incredible and absolutely going back. Perfect limestone, similar to Potrero Chico except not nearly as chossy. Really well bolted too. Unfortunately, I spent a big chunk of my trip lying on the cold tiles of the bathroom floor puking, but alas, it was worth it for the beauteous rocks. Climbed some super fun moderates. My climbing bud and I suck at photos but here are a few of one of the many dreamy walls at Viñales. Proof that I at least put on a harness and ate snacks in the dirt: - not sure where the boulder is from, OP didn't label the location.

i mean, what in tarnation???

I can't even begin to understand how someone can have that kind of mental strength.

Been sport climbing a LOT lately because I'm too scared to boulder after tearing my MCL. Feeling strong, Flagstaff has so much great sport route opportunity I've been getting up super early 5-6am with my partner and going out and climbing 4-5 hours each morning. Getting more confident on lead but first few bolts always sketch me out.

Anyone ever make that journey towards more technical stuff? 5.12+ type deal? Right now I feel like my strength endurance is my weak spot for sure so I've been circuiting routes in the gym to work on that a bit.

Anyone got big climbing trips planned coming up?

Lots of outdoor climbing as of late, made it out to Bishop for a highball festival. Did a little bouldering but fell in love with Owen's River Gorge and did a bunch of sport there.

Here's me leading some slab It has been interesting to see my progression since the summer, getting a decent amount of lead falls under my belt has made me way more confident on lead to where I can lead 5.11 outside and not be too stressed/worried. I'm pretty happy with my mental growth in the sport as opposed to just physical growth.

Still working towards my 5.12 goal but I've just been so happy to find people I feel confident in climbing outside with that I find myself more interested in just climbing outside a lot and I'm not so much concerned with hitting that grade outside.

Going to Idaho this summer for a job, excited for the opportunities up there.

extremely dope, but no thanks to slab. can't wrap my head around that, probably just need to do it more.

this september i met up with and a couple other friends who may or may not be on care-tags and we got in 3 days of climbing at Rumney. Super dope, very humbling, and hard after having not lead outside for over a year and having not really climbed much in a year either.

my bike teammate and i have been climbing 1-2x days a week this offseason which has been great and a nice mental break from the 10hours i'm putting on the bike every week. she wants to crush a local comp next spring, i just wanna get stronger and have endurance to have fun in Rumney again.

Headed to Yosemite, Smith rock, then back down to Zion national park next week for a climbing trip. Unfortunately not a lot of dry rock on the west coast according to the forecast but we'll keep ourselves busy for sure.

new job has a bouldering wall so I've been doing that - there's a group that climbs every friday before lunch!

enjoy a gif of me climbing in a flannel cause i'm not good at forward thinking (not work, some free anniversary event)

gravity vault is the closest, but both (there are two) are ~40min away on toll roads without traffic, which can easily turn into an hour+ after work :(... Maybe I've just been spoiled by having good rock gyms within 20min in a lot of places I've lived

touched some real rocks for the first time yesterday.. this shits a lot harder than i thought, props to all u rocktouchers

i had a lot of fun, tho i think i need to work on my finger muscles

In Boise for the summer. Already hit up City of Rocks, went through big time and little time and theatre of shadows over the weekend. Granite is primo. Headed to Spring Mountain eventually, also want to hit up Smith Rock before the end of the summer.

Any advice on getting into trad aside from finding a mentor who can teach you and is down to climb with you?

Jumped ship to the gear train, definitely starting slow but it feels like learning to climb all over again. 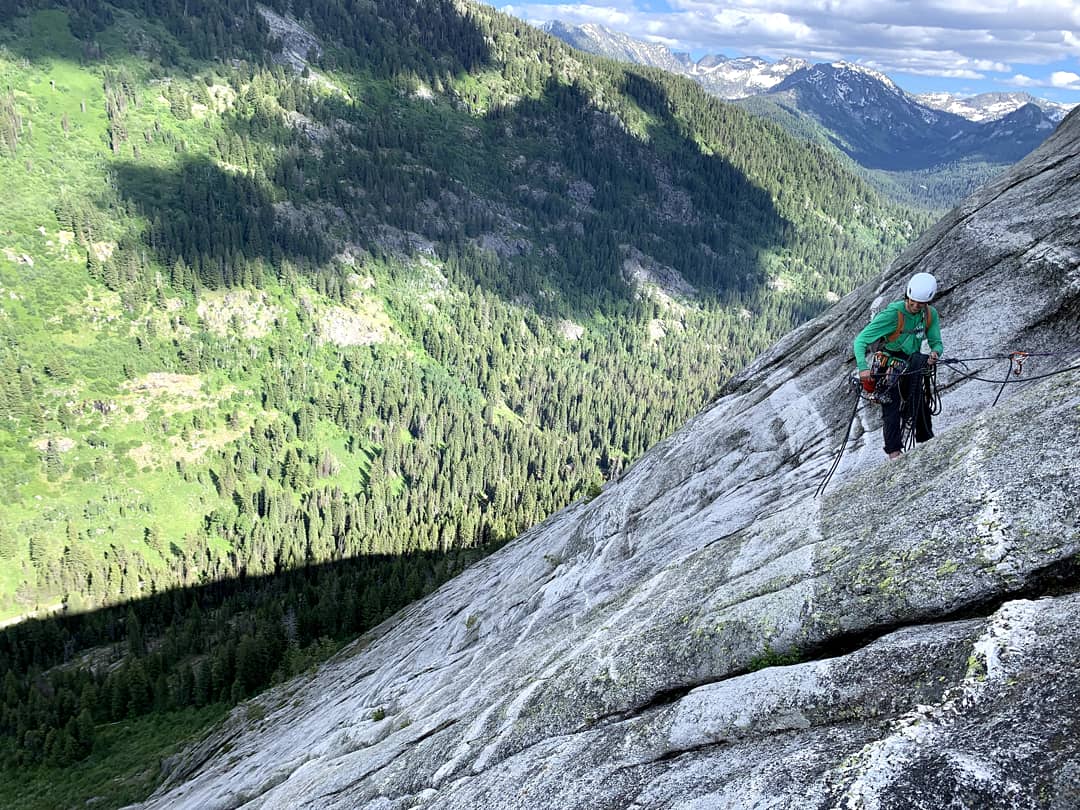 anyone been back to the gym yet? mine is open and they have a pretty low person limit and require masks but it still doesn't feel right. definitely miss climbing though i know my hands are going to get destroyed on first go back


i'd walk a mile for a camel

Users browsing this forum: No registered users and 10 guests